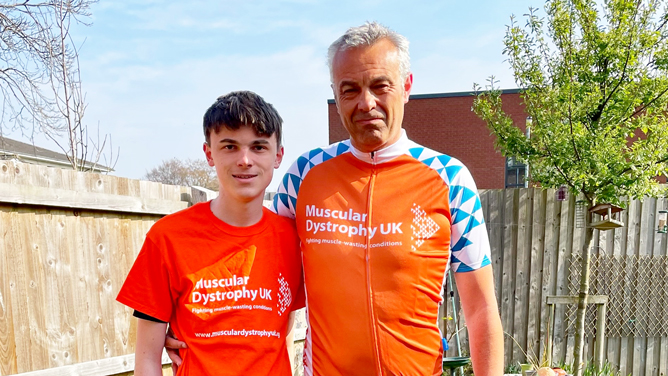 Alex Hunt, from Ainsdale in Merseyside, was diagnosed with Becker Muscular Dystrophy when he was 12 years old. Alex is a football fanatic who supports Liverpool FC and loves playing FIFA on his XBOX.

It was apparent from quite a young age that Alex wasn’t as ‘sporty’ or as able as many of his friends, but he still managed to play for a local team. However, as time went on it became more difficult for him to play, and he often complained of pain, particularly in his legs. Even on walks in the park he would often have to stop and was clearly in pain. That was when we sought medical advice, which ultimately led to his diagnosis at Alder Hey hospital in Liverpool.

Alex always puts a brave face on his condition, but I know he was devastated when he had to give up playing football for his team. He still finds it hard that he can’t play football (he can still manage a short kick about on good days), go cycling with his friends, or chase his little sister in the park.

We’ve been very lucky to have had great support from Alex’s medical team, his school and sixth form college, and the team at Muscular Dystrophy UK. We hope he gets the same support as he now looks ahead to University.

Knowing he had to give up on his passion of playing football was devastating for us as parents to see and to help him deal with. It is also the hardest thing for any parent to see your child in pain and know there is nothing you can do to help or take the hurt away. That doesn’t change or become any easier as he moves into adulthood.

The support of Muscular Dystrophy UK has been so helpful to all of the family David, Alex’s father, decided to get involved with supporting Muscular Dystrophy UK after he became aware of the charity through their website and their subsequent support for Alex – the charity helped enormously with emotional support, as well as information about the condition, and what support is available, and that Alex is entitled to.

“My first fundraising event was to run the Mersey Tunnel 10k in October 2017 which, being a non-runner, was a real challenge. With some great support from friends, family and work colleagues I managed to raise an incredible £2,184. This has spurred me on to do more. A group of friends took on the Great North Run in 2018 to raise more funds for research, sadly I injured my knee which required surgery, so I missed the run myself. I’ve now moved to cycling for fundraising. In 2019 along with a group of friends we cycled the Liverpool 50km Night Ride. Activities were curtailed in 2020 due to the pandemic, but in July 2021 I’ll be cycling 50 miles from Liverpool to Chester and back. So far we’ve raised over £12,000, but hope to do so much more, to help find a cure”.

David has pledged his commitment to Muscular Dystrophy UK by setting up a Family Fund in support of Alex – aptly named Alex’s A-Team – which will also be supported by many of David’s own family, friends and work colleagues.

“It has been dark at times for all of us, but knowing that there are so many research projects underway, that could provide treatments and a cure that Alex could benefit from, along with others with the same condition, is really uplifting. Knowing also that you are not alone, and that there is tremendous support out there for Alex, from friends and family, others with the condition, and from Muscular Dystrophy UK makes us all optimistic for the future”.

Alex is hugely compassionate and knows that there are many people with Muscular Dystrophy, so he’s always been keen to raise money to help fund research into the condition. I think that knowing he has such support from his A Team will help him get through the darker moments