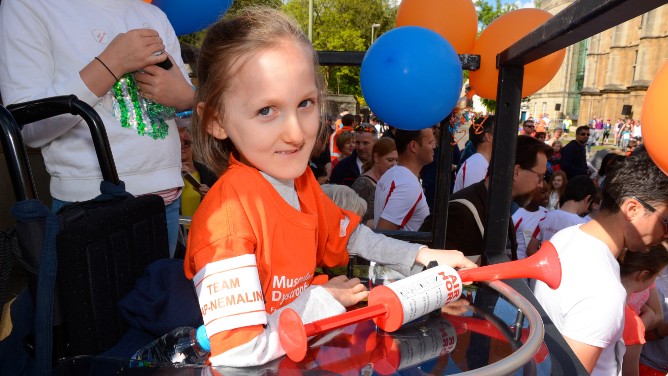 In 2010 Meriel (aged 21 months) was diagnosed with Nemaline myopathy, a very rare muscle condition with no treatment or cure, which changed the lives of her family overnight.

Nemaline Myopathy is one of the congenital myopathies in which changes in the muscle cells make them less able to contract. This weakness of the muscles means that Meriel and children like her are totally reliant on support from others in so many ways.  Meriel now needs support to sit up in bed as the day begins, to get dressed and continues to have mechanical support from machines to help her breathe 24 hours a day, to cough when she has a cold and a gastrostomy tube for basic nourishment.  As we end 2019 Meriel is no longer walking but her beautiful smile remains the same and brings joy to us all.

It made us aware very quickly and in a very humbling way of how much of our physical lives we take for granted. Meriel faces these day to day challenges head on with a smile, a great twinkle in the eye, a determination and a sense of humour that is extraordinary. So many children like Meriel are faced with an intense uphill battle in life, constant exhaustion of the muscles is a daily fight, with mobility becoming increasingly difficult as the body grows, scoliosis is often inevitable, and the lungs struggling with every infection.”

Her family hope that by raising awareness of this little known muscle condition, it will be possible to directly fund research that may make that uphill battle for children diagnosed with nemaline myopathy in future generations a little easier. In the last ten years there have been extraordinary developments in the understanding and discovery of the various genes that cause the condition. Gene therapy as a whole is still in a very formative state and research in the years ahead will be vital to take this to new levels.  The family are delighted that their support so far has enabled three research projects to begin, including one on improving diagnosis and one looking at slowing down muscle atrophy.

In May 2019, following a busy weekend taking part in the Oxford Town and Gown event, Meriel and her family headed to Deddington for an evening of baroque music performed by the Cothill House choirs.  The evening included a stunning violin solo from Leo Zhu, a beautiful solo from Meriel’s brother Miles and a number of uplifting pieces from the orchestra and choirs combined.  Over 130 guests attended on this special spring evening.  Meriel, her family and Muscular Dystrophy UK, would like to thank all who attended as well as thank those who put in so much work to ensure that the evening was a success. An fantastic total of £14,300 was raised to support research into Meriel’s condition.

On Tuesday 13 November, 50 guests gathered at The Ashmolean rooftop to sample the food of Masterchef finalist Nawamin Pinpathomrat who designed a special orange themed menu for the guests to feast on.  During the evening a fantastic auction was held and we are pleased to announce that an incredible £46,000 was raised which will be used to support new projects that will further our understanding of Nemaline Myopathy.

Thank you to everyone who supported the event including The Ashmolean, Benugo – for donating the food, and everybody who either donated or bought an auction lot on the night.  Special thanks to Nawamin for giving up his time to help our fund and for spending time with both Meriel and Miles – thus ensuring that they are still his biggest fans!

Charity basketball match against the Warwick Bears: On Sunday 17 June 2018, Map Nemaline as the TDS Tigers took on the Warwick Bears WBC to raise funds and awareness for Nemaline Myopathy research. It was a wonderful day and an amazing experience to play against elite players from Team GB and Invictus Games. A huge thank you to everyone who took part, helping to raise £800 so far.

Oxford Town & Gown 2018: On Sunday 13th May 2018, the MAP Nemaline team took on their second Oxford Town and Gown 10k.  Miles and Meriel led the charge in the 3k race whilst their father, joined by friends and family, took on the beautiful course around Oxford.  Thank you to all who took part or sponsored the team, helping to raise over £7,000!

The Dream Stone Triathlon Book: Sunday 15th April saw the launch of The Dream Stone, an inspirational book based on the true story of Meriel’s dream to place her stone at the top of Mount Snowdon.  This incredible achievement took place in 2016 with an epic expedition led by Anna-Marie (Meriel’s friend and carer), who has now chronicled their adventure in her debut novel.  The book feature illustrations from Meriel and her brother Miles.  The book is now available to order online, with royalties supporting research into Nemaline Myopathy.

Parallel London: On Sunday 3rd September, Meriel, her brother Miles and his friend Ottie stormed to success by running the 5K route at Parallel London in Queen Elizabeth Olympic park.  Not only did they fly past our cheer point, so quickly that we barely had time to shout our good luck messages, but they also smashed their fundraising target by raising almost £3,000 from sponsorship and ingeniously ‘borrowing’ picnics from families at their school sports day and selling them back to them!  If you would like to sponsor Miles, Meriel and Ottie, please do so here!  Thank you for your support and a big well done to this terrific trio – they are an inspiration to all.

Oxford Town and Gown:  On the 14th May 2017, Team MAP Nemaline took on the challenge of running 10K around the city of Oxford.  A team of more than 20 runners took on the adult and junior races on a beautiful sunny morning.  Meriel was honoured to be asked to start the race and was joined by her friend Lulu at the starter’s podium.  Her older brother Miles also hot-footed it back to assist after completing the 3K junior race in a terrific time of 15 minutes and 11 seconds.  More than £10,000 was raised by the team, who were joined by family friend and TV star Alex Polizzi to fund new projects into Meriel’s condition.    Meriel and her family would like to thank everybody who either took part, sponsored or cheered on the team, you are all brilliant and we hope you will all be back next year!

Dreamstone Triathlon: In August 2016, Meriel’s vision of placing her ‘Dream Stone’ at the top of Mount Snowdon became a reality. After weeks of planning by Meriel and her good friend and carer Anna-Marie, the MAP Nemaline team completed a very special triathlon. Meriel kicked off the event by completing the swim near her home in Oxfordshire, her teacher took on the second leg of this epic adventure by cycling 170 miles to Snowdonia and there, he was joined by Meriel and the rest of the MAP team who took on the climb to find a suitable place for the stone. Meriel and her fellow triathletes would like to thank all those, near and far, that supported them on this journey and helped them to raise almost £19,000 towards research to find treatments and cures for Meriel’s condition.

2015 news: In Autumn 2015, MAP Nemaline helped to bring about a one day workshop held by Muscular Dystrophy UK, bringing together researchers and clinicians from all over the world to review the field of nemaline myopathy. The aim was to describe strategic areas for an international grant call into nebulin-related nemaline research to drive forward the development of treatments.

This grant call was made largely possible by MAP Nemaline and was launched in November 2015.