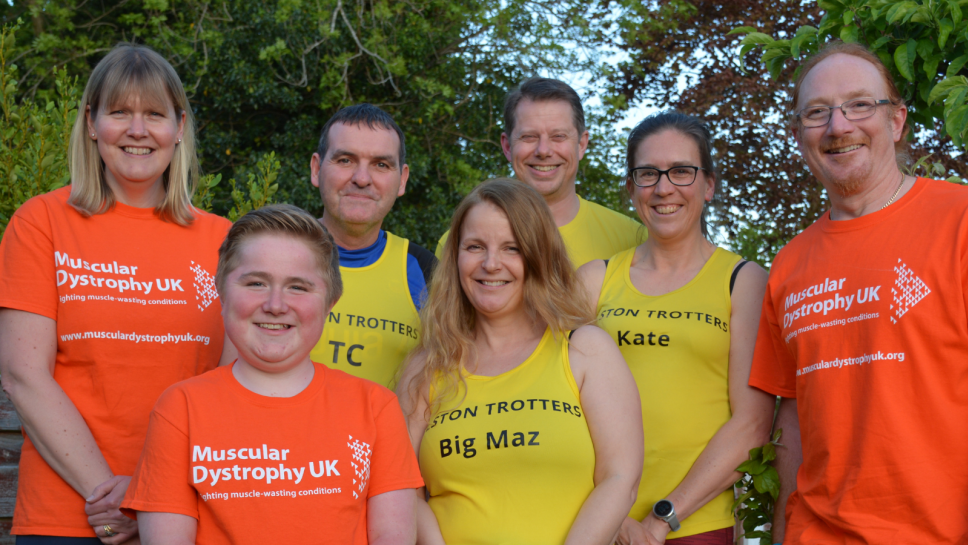 Six members of the Tilston Trotters, a 20-strong running group based in Crewe, will be tackling the grueling Pedal Paddle Peak challenge on Saturday 2 July.

The Tilston Trotters team will compete in the eight-hour challenge across the Lake District to raise £4,000 for 15-year-old Thomas Robinson who lives with Duchenne muscular dystrophy, a rare progressive muscle-wasting condition that currently has no cure.

"The charity put us in touch with Thomas and his parents, Karen and Neil, as we were keen to put a face to the cause. Four of us Trotters went to Crewe to visit the family and we spent almost three hours together. They were lovely. Meeting Thomas gave us such a boost – he is such a bubbly character and he really inspired us,” said Doug.

"Karen and Neil have a Family Fund for Thomas, which means they can choose how Muscular Dystrophy UK will use the funds raised. It feels great to be raising money in his name.”

Tom's mum, Karen Robinson, said, “The Tilston Trotters are very brave to be taking on such an extraordinary challenge! We feel very privileged that they have chosen to support our family fund and ultimately our amazing superhero Thomas.”

“We have specifically requested that funds raised be donated to Muscular Dystrophy UK’s Duchenne Research Breakthrough Fund, to accelerate the development of effective treatments for Duchenne,” added Karen.

Doug, the team captain, said: “I don’t know how I’m going to get up Helvellyn, but I’m looking forward to it. The last time I went up there, it was 1987 and I was a sixth former on a geography field trip!”

The Trotters have already hit the £3,500 mark by hosting local events in their villages, including an 80s disco night, where Doug, Kate, Mary and Tony dressed up as pop group Bucks Fizz and pulled off the famous Eurovision dance routine, complete with detachable skirts.

As well as the 80s Disco night, fundraising events the six Trotters have held include a classical musical evening, organised by Jo and Tony, which raised £550. Mary, a nurse and personal trainer, from Tilston, held a 3-hour aerobathon in her local village hall which brought in £500.

Kiera Santry, Senior Challenge Events Officer, said: “We were delighted to introduce the Tilston Trotters to Thomas and his family, so they could see for themselves the difference they could make to someone’s life by taking on Pedal Paddle Peak. We’re excited to welcome the Tilston Trotters to the Lakes for this year’s event and applaud all their fundraising efforts.”

“Since we first launched Pedal Paddle Peak in 2016, the event has raised over £300,000 to help beat muscle-wasting conditions. There are 130 participants taking part this year, including Doug and his team, and we’ll be there cheering them on!”

Sponsor Doug and his team here