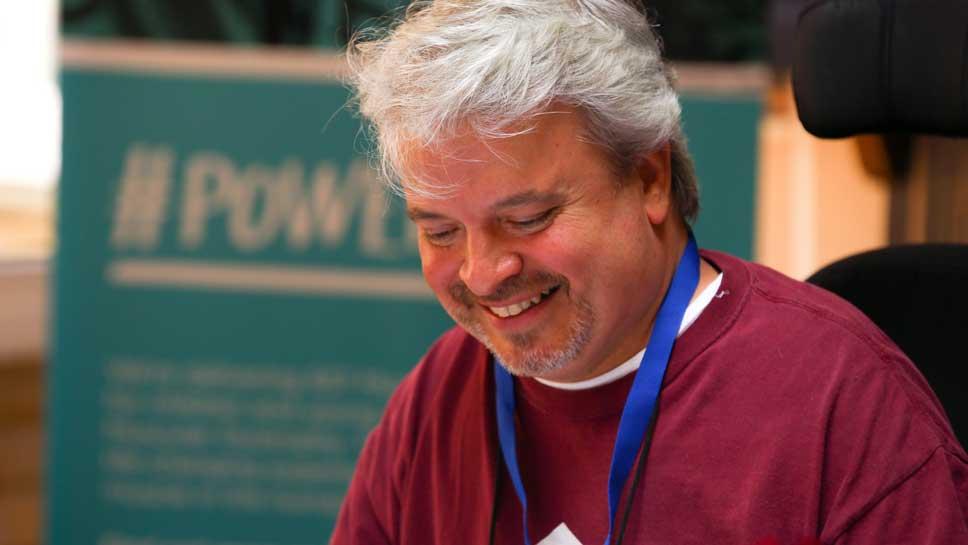 MDUK is marking the seventh annual Limb Girdle Muscular Dystrophy (LGMD) Awareness Day on 30 September 2021 with the story of disability leader, speaker, charity founder and CEO, Michael McGrath, who was diagnosed with LGMD2A at the age of 18.

Caused by mutations in the CAPN-3 gene, this condition type ultimately causes progressive, debilitating weakness and wasting that begins in muscles around the hips and shoulders before progressing to muscles in the arms and legs.

Michael is a sought-after motivational speaker, record-breaking polar adventurer, multi award-winning charity founder and role model for future generations regardless of his disability.

Michael graduated in 1988 from the Department of Hospitality, Leisure and Tourism Management at Oxford Brookes University. Twenty-one years later, he became the first disabled person to lead expeditions to both the North (April 2002) and South Poles (January 2004.)

He was recognised by the Queen in 2004 for his 'contribution to national life' at a reception at Buckingham Palace celebrating those that have made a positive difference to the lives of others across the country. A catalyst for change, Michael was included in the 2004 Christmas Day broadcast to the nation by Her Majesty, reinforcing diversity as a strength.

In addition to those of other key sponsors, including DHL and Hilton Hotels, Michael planted the Oxford Brookes flag in Antarctica at 90⁰ South. Eight years on, and nominated by the Sainsbury’s campaign, Michael stood upright in his new ETAC-890 powerchair, carrying the London 2012 Paralympic Torch on one of its final legs to the Olympic Stadium.

Affectionately known at the Chief Muscle Warrior, Michael arranges highly personalised experiences, some of which have included:

MHF’s vision is to offer hope, inspiration and empowerment to its beneficiaries and their families. Despite the challenges of COVID-19, the charity repurposed, adapting its operational capability, and2021 sees MHF celebrate 18 years.

Under Michael’s leadership, its work and impact have touched the lives of thousands of people across the UK. To date, the charity has delivered 423 Muscle Dream interventions (both face-to-face and now, increasingly, virtual), leaving a further 234 to go – the goal is to deliver 657, that’s one for every muscle in the human body.

Michael was included for the fourth consecutive year on the Power 100 list, as one of Britain’s most influential people with a disability. Within the UK-wide charity sector, he also received the respected Inspiring Communicator 2016 CharityComms National Award. In 2018, Michael was awarded an Honorary Doctorate of Arts (University of Hertfordshire) in recognition of his motivational and inspirational work for persons with a disability and, in 2019, he was appointed to represent the Crown as a Deputy Lieutenant (DL) in Hertfordshire, a voluntary role.