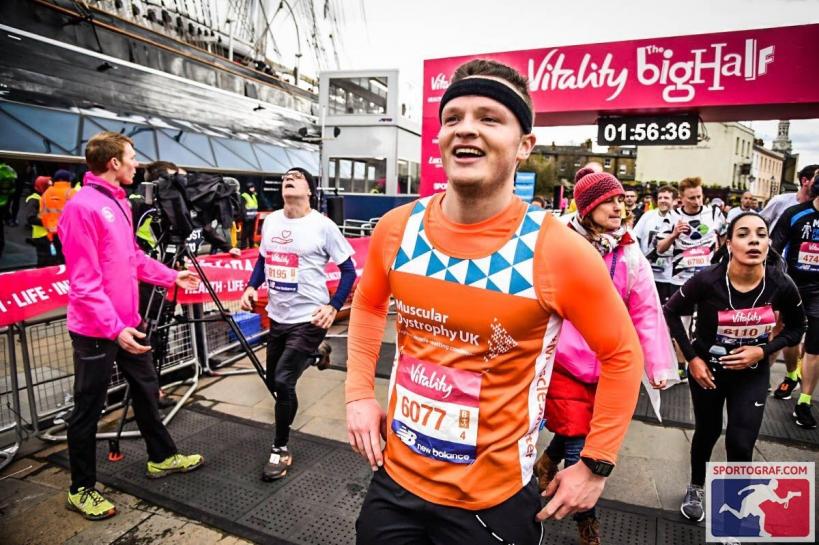 Sam Tisbury, from Brentwood, has a strong connection with MDUK through supporting his Uncle Bryon, who had a muscle-wasting condition and died in 2019.

The first time Sam pulled on the #Teamorange T-shirt for MDUK was for the London Marathon in 2018. Now he is to complete a whopping four marathons and two half-marathons, in just six weeks.

Sam, who works in financial services, was, like many, gutted when the pandemic stopped him from being able to raise vital funds for MDUK.

He had registered for both the Berlin and Royal Parks (London) half-marathons before they were cancelled in 2020. When the races were rescheduled, plans for an unintentional challenge were emerging as by now, Sam had also booked to do the Lisbon Half Marathon in October.

I already had three races booked in four weeks before I heard that three of my closest friends were running the London Marathon. I instantly got FOMO (fear of missing out) and found myself contacting MDUK to try and get a space with them, after missing out on the ballot again. The London Marathon in early October slotted in nicely after the Berlin half. I then decided to book two more marathons, and chose Ljubljana (Slovenia), and Frankfurt.

With events opening up and lives returning to normal again, this was my first chance to complete a series of challenges for MDUK. I wanted to do several in memory of my Uncle Bryon, who lived so well and never complained about his condition, which was limb girdle muscular dystrophy”

When the Frankfurt Marathon was cancelled, and no other marathon distance races were available for that weekend, Sam had to come up with his own route for the final marathon in his challenge. Starting in Exeter, he’s going to run down the coastal path to Paignton Beach. “Mentally, I think this one will be the toughest, as there will be no crowd or other runners to push me through the final leg. Thankfully, a few friends will be coming to support me on the day to get me over the line.”

Starting in Berlin on Sunday 26 September, Sam’s epic challenge schedule is as follows:

31 October – his own route, a full marathon run from Exeter to Paignton Beach.

While training has been going well, it’s not been without difficulties. Sam had surgery in mid-April and that stopped from doing any running training until May.

But nothing gets in the way of his determination to support MDUK. After this series of events, he will have raised over £5,000 for the charity since he started fundraising for us in 2018.

Why not read more about Sam’s fantastic 2-2-2 challenge and support him here.