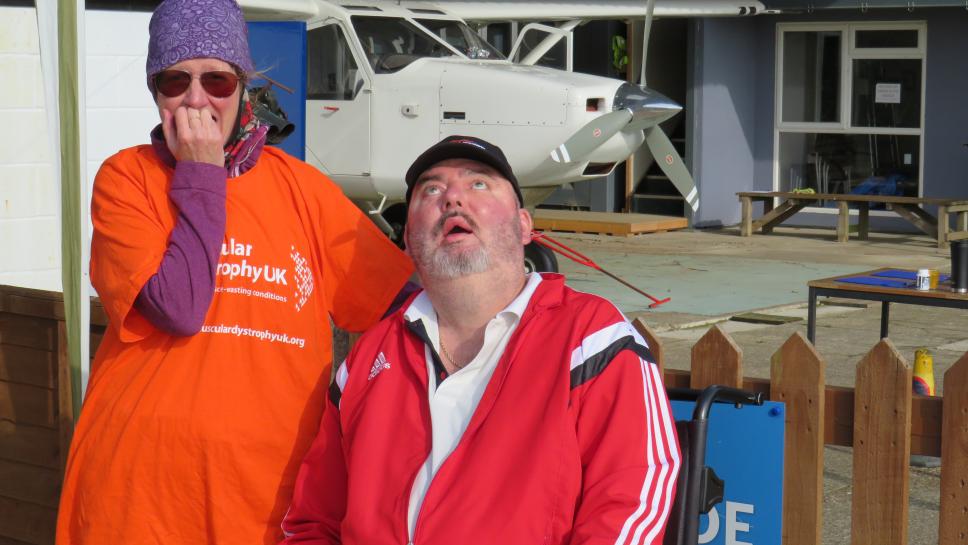 From the weigh-in to the bumpy take-off, amazing views and frightening landing, Lis Watson has described her fundraising skydive experience, and why she might be prepared to do it all again. Read her colourful blog post below, and find out how Lis conquered her fear of heights and skydived on 24 September to fundraise for MDUK and to support her friend, Simon Wright, who has facioscapulohumeral muscular dystrophy (FSHD).

On the day, the weigh-in was followed with a video briefing, which made it all look so easy.

Next, we had the trussing up – aka getting into your parachute. And then it was into the plane to sit on a long cushion between the instructor’s legs. Take-off was a bumpy affair on the grass runway and there are no such things as seat belts in this plane. The views looked fabulous and we were so high up! And then the instructor said, ‘Well that's a thousand feet, only another 9,000 to go!’

I was just admiring the views of Hornsea and the Humber Estuary beyond, when the instructor tells me I need to sit on his lap so he could do the final clips and make sure I was going nowhere fast without him. It's not often I feel comforted by a total stranger getting so up close and into my personal space! Once attached, we then have to do a very un-glamorous and awkward shuffle so that he can reach the door handle.

After opening the door you get a few seconds to take deep breaths to acclimatise to the colder air. Then, before I know it, I'm sitting sideways dangling with my body suspended – then ‘oh crikey’, we’re doing a full tumble tail and East Yorkshire is coming to meet me at 130mph!

All I know is that it’s really noisy and I have stopped breathing. I was in such a sense of disbelief that I was actually falling through the air that I could not even smile for the palm camera that the instructor was pointing at me. Then there was a tap and loud crack. The feeling of relief at the ‘chute having actually worked almost compensated for the feeling that my legs had been pulled from my body, as we rapidly decelerated from 130mph to 15mph.

Before I could even glance at the fabulous views of East Yorkshire, my instructor decided to put me through a series of manoeuvres that would have made the Red Devils proud. Starting with a sharp left spin, we dived and twisted before briefly pulling level only to twist and spin the other way.

By the time we got to the last 1,000 feet, I was convinced that a car on the A165 was about to get more than a bird dropping landing on it from the sky. The approach to the landing spot took us over some trees, which had the men wondering if they would be cutting me down from the branches, but with knees raised we were all too quickly sliding in on our bottoms.

I have never felt so pleased to feel the sensation of sitting on wet, slightly muddy ground! It was not until the instructor suggested I get up, that I realised how weak my legs felt. I leaned to my right to use my arm to push myself up, and my arm gave way. The lactic acid build-up was amazing and, for a moment when all my limbs felt too heavy to move and I could not imagine how I could possibly stand, I got a small sense of what it must feel like for Simon, who has muscular dystrophy.

It is the brilliant friendship between Simon and me that has inspired me to face my fear of heights for the charity skydive. He has become my mentor and counsellor and his friendship has helped me regain my confidence.

Would I do it again? Maybe. But only with lots of extra padding in strategic places, after several drinks, with a guarantee of no spinning, and with someone as mad as me in support!

If Lis has inspired you to face your fear of heights and skydive for MDUK, please join us and take the leap of a lifetime. Sign up here.