The April Avengers: 11-year-old twins take on superhero challenge to fundraise for MDUK 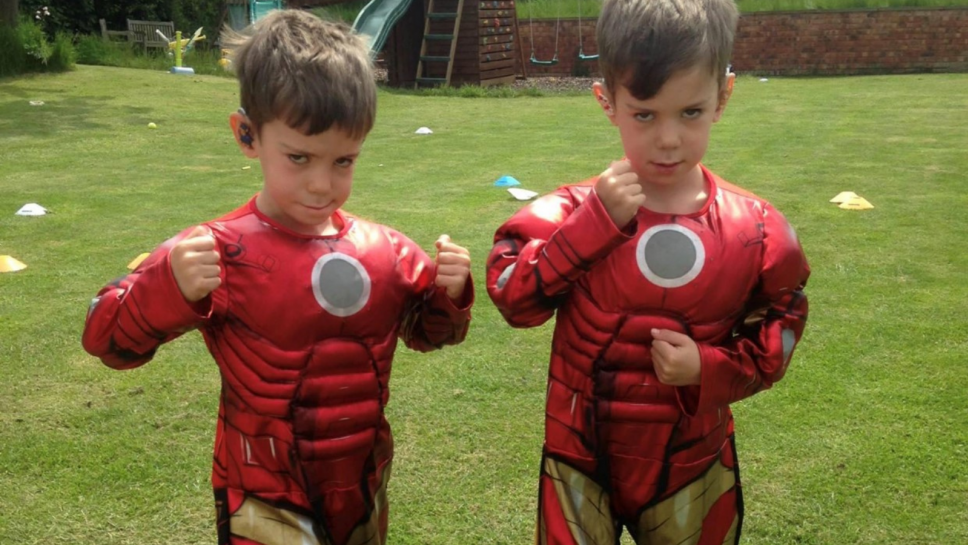 Inspired by their favourite superheroes from the Avengers, Oscar and Seb Spink will be climbing the equivalent of the Stark Tower over 30 days across April; that’s 130 flights of stairs!

While many people take walking up the stairs for granted, Oscar and Seb live with facioscapulohumeral muscular dystrophy (FSHD), a progressive muscle-wasting condition, which will make the challenge incredibly difficult as they find it exhausting to walk, have a lack of balance and shortened leg muscles.

“The boys are mad about Marvel and just like the Avengers are constantly facing challenges, we were discussing with the boys how living with FSHD is a bit like being a superhero. The boys wanted to set themselves a superhero challenge and they decided that getting to the top of the Avengers tower (we call it the ‘Spink Tower’) would be a good target. They’ve always wanted to be part of the Avengers team!”

Oscar and Seb were diagnosed with FSHD in July 2019.

“Muscular Dystrophy UK was there for us from day one. We’d been informed by a letter arriving out of the blue – a devastating way to find out such a life-changing diagnosis. With no signposting from the NHS, we discovered Muscular Dystrophy UK online and called the helpline.

“After all the support we’ve had, we felt strongly that we wanted to give something back to Muscular Dystrophy UK. Our fundraising contributes to research into the condition, with the goal that treatment will be found and this will be the last generation of children growing up with this condition,” said Kerry.

Oscar and Seb aim to raise £30,000 for MDUK this year to help fund research and support others with muscle-wasting conditions.

Kerry is confident the boys will both encourage each other to complete their superhero challenge for such a good cause, with some healthy competition thrown in too: “I suspect there will also be a competitive element on who can get upstairs first – it’s a twin thing!”

“Oscar and Seb are real superheroes taking on an extraordinary challenge to climb the equivalent of the Stark Tower over 30 days. Most people take climbing the stairs for granted but FSHD makes just a few steps exhausting. I’m so grateful to the Spink family for their fantastic fundraising for Muscular Dystrophy UK, which has enabled us to fund research into helping develop treatments for those living with muscle-wasting conditions.”

We wish Oscar and Seb the best of luck in becoming the April Avengers and would like to thank the whole family for their ongoing support.

Help Oscar and Seb smash their fundraising target of £30,000 here