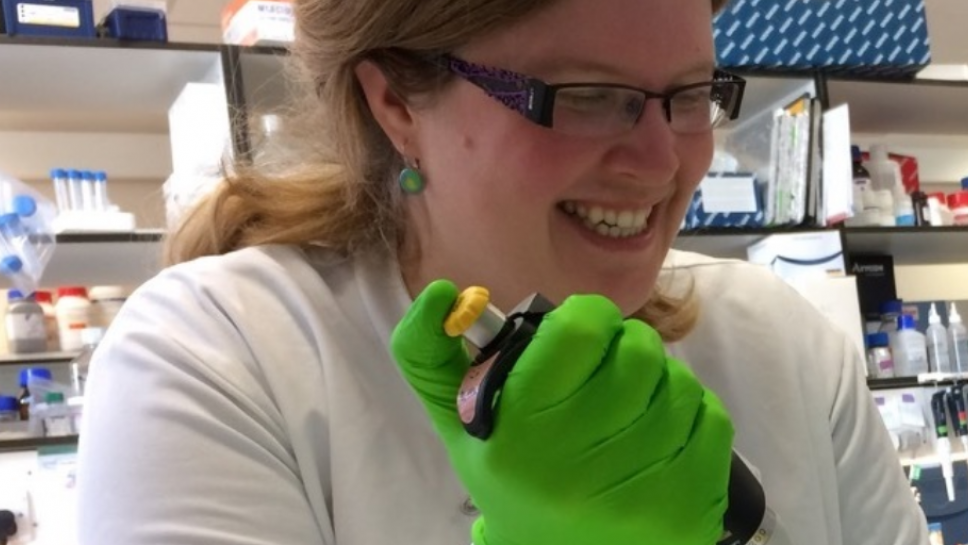 Dr Melissa Bowerman and Emma Sutton, her PhD student at Keele University, are investigating whether a commercially available drug that targets the body’s metabolism could be a potential treatment for SMA.

Recent advances in SMA research have led to the exciting development of genetic therapies, such as Spinraza, Risdiplam and Zolgensma that increase the levels of the SMN protein. However the success of these therapies is dependent on age and severity of the condition. So it’s important to explore non-SMN specific therapies that could be used in combination with genetic therapies to be potentially more effective.

This project aims to develop a potential non-SMN specific therapy. Dr Bowerman has previously shown that a hormone involved in regulating the body’s metabolism is elevated in a mouse model of SMA. Reducing the activity of this hormone improved the health of the mice. Dr Bowerman and her student will now determine whether a commercially available drug will have the same effect.

So far the team has investigated the drug in different cell models of the muscle, fat and nerves. They found that the level of the hormone in these cells was reduced after treatment with the drug. Importantly the drug did not damage the overall health of the cell models in the lab.

The team have also begun work in healthy mice and mouse models of SMA in the lab, which they will use to further test the efficiency and safety of the drug. This year the Bowerman lab will investigate if the drug reduces the level of the hormone and improves SMA symptoms in the SMA mouse models.

This work will provide crucial information on the drug’s therapeutic potential for the treatment of SMA. Because the drug being tested has already gone through clinical trials for other health conditions, researchers already know a lot about its safety and how it works. If it’s shown to be beneficial for SMA, it could potentially be taken forward to clinical trials faster than a new drug.

Dr Bowerman and her team have also published a paper on repurposing commercially available drugs for the treatment of SMA. You can read it here.