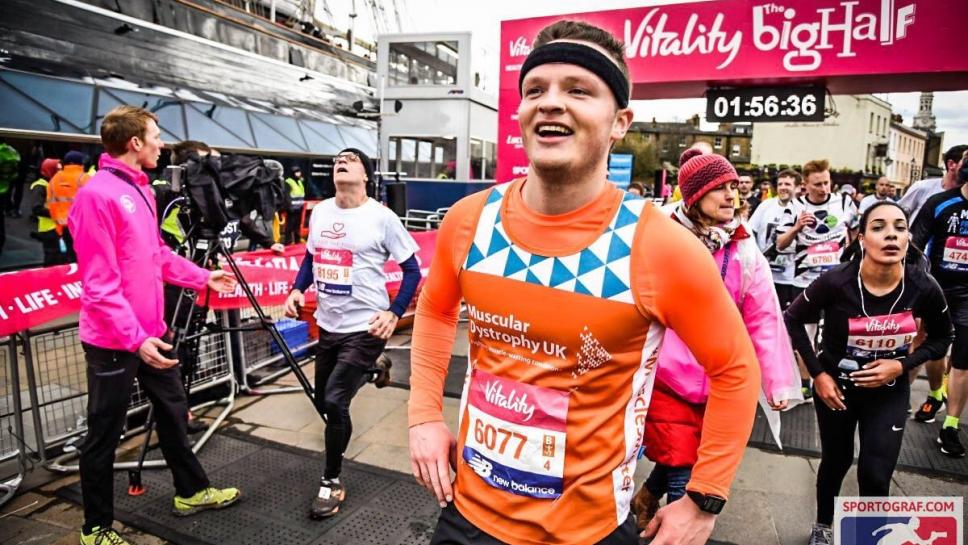 Sam, 32, from Brentwood, began volunteering and fundraising for Muscular Dystrophy UK (MDUK) in 2018 when he ran the London marathon.

What started as a way to support an uncle who had muscular dystrophy quickly became an exciting extra dimension in Sam’s life.

It's just fun! Everyone is easy going and friendly. People at MDUK really appreciate you taking time out to help them.

Since that first London marathon, Sam has been involved in many MDUK events, both fundraising and volunteering.  This year he will run four marathons and two half marathons in the space of six weeks, between 26 September and 31 October.

I have helped out at three Town & Gowns. At the Oxford Town and Gown 10k I have been on the water station and a course marshal but the most exciting time was being the lead bike.

Cycling around the closed roads of Oxford was quite something, especially with about 1,500 people chasing me. The atmosphere is always great, with everyone in high spirits. It is helped, of course, if the weather is good.

It feels great to play my part in raising awareness of muscular dystrophy, but I also really enjoy the atmosphere of the crowd on the day and the appreciation from the runners as they pass by.

My uncle, Byron Truscott, was diagnosed with muscular dystrophy when he was in his twenties. He was told he was unlikely to live past the age of 45. Unfortunately, he died in December 2019, aged 64, but he had beaten all expectations. He was, and still is, my hero.

He was the kindest and most generous man you could meet. Having a muscular dystrophy condition did not deter him from happiness, particularly with his wife and family by his side. He was really proud with what I have done for MDUK, and I want to continue raising awareness for his legacy.

Back in 2018, after fundraising and meeting the team, I wanted to do more to help that goes beyond fundraising. It's difficult to keep asking the same circle of people for sponsorship, so by volunteering for events I can stay involved without making a dent in everybody's wallets!

As well as my own fundraising efforts this year, I will be helping out in two more events: The Marathon Expo and the Sports Quiz. Also, whilst this isn't volunteering, in August, I also participated in the Yorkshire Three Peaks with a family I've been friends with since my affiliation with MDUK started in 2018.

It’s a great way to meet new people and do something that enables you to give back. Try one and find out for yourself!

Interested in volunteering? Why not get involved in our special events, or at Cambridge Town and Gown?