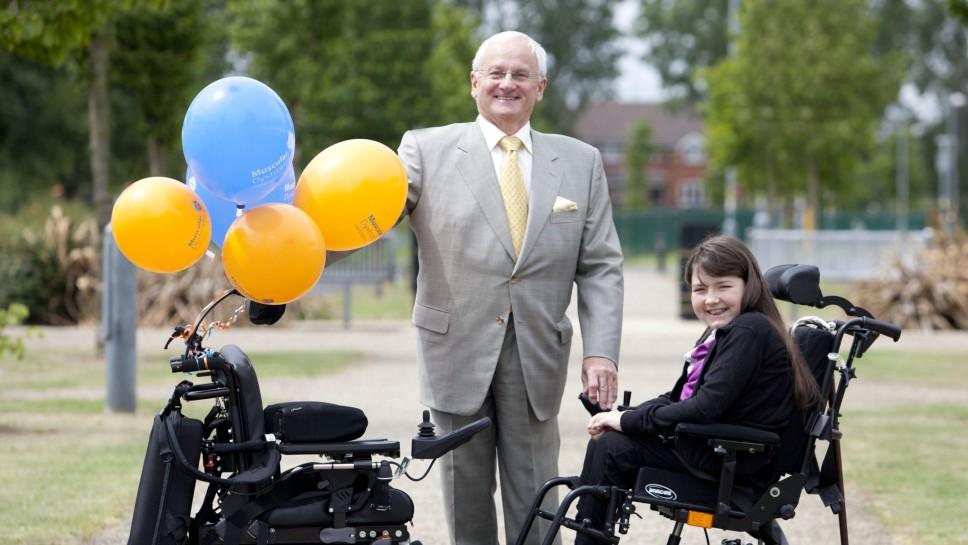 It was with immense sadness that we have learned of the passing of Alexander Patrick, CBE DL, an Honorary Life President of Muscular Dystrophy UK.

Alexander made a huge, life-long contribution to the fight to beat muscular dystrophy and related muscle-wasting conditions.

Alexander was a businessman who had a close understanding of the impact of disability and, in particular, of muscular dystrophy.  He lost his brother Andrew to Duchenne muscular dystrophy when Andrew was just 13 years old.

Joseph Patrick was successful in the West Midlands motor industry and was a long term funder of the charity. He gave significant financial backing to scientific research and steps to improve care for those with muscular dystrophy and Alexander continued his support and backing for Muscular Dystrophy UK.

Alexander was a very generous, long-term financial supporter of Muscular Dystrophy UK and he also gave a huge amount of his time and expertise as a trustee and adviser.

After his father’s death, Alexander ensured that his father’s foresight, dedication and commitment would be long remembered through establishing the Joseph Patrick Trust which has helped thousands of individuals and families with muscular dystrophy with grants for wheelchairs and vital equipment.

Alexander’s financial support and generosity were evident in other spheres besides muscular dystrophy as he had a passion for the arts with a love of ballet, theatre and music.  As a philanthropist, he quietly went about supporting the causes he felt strongly about although he never forgot the impact of muscular dystrophy on his own family.

A modest man, caring and thoroughly decent, he was honoured with his appointment as a Deputy Lieutenant for the West Midlands and in 2012 he was recognised with the award of a CBE for his philanthropic support of charitable causes.

To underline the importance of the contribution made by Alexander Patrick, without his generous long-term support we would not be seeing today potential treatments for muscular dystrophy in development and entering clinical trials.

We also know thousands of people have received help to acquire a wheelchair or an aid to daily living through a grant made by the Joseph Patrick Trust which Alexander himself established.  We will be forever in his debt and our thoughts today are with his wife Valerie and all his family.