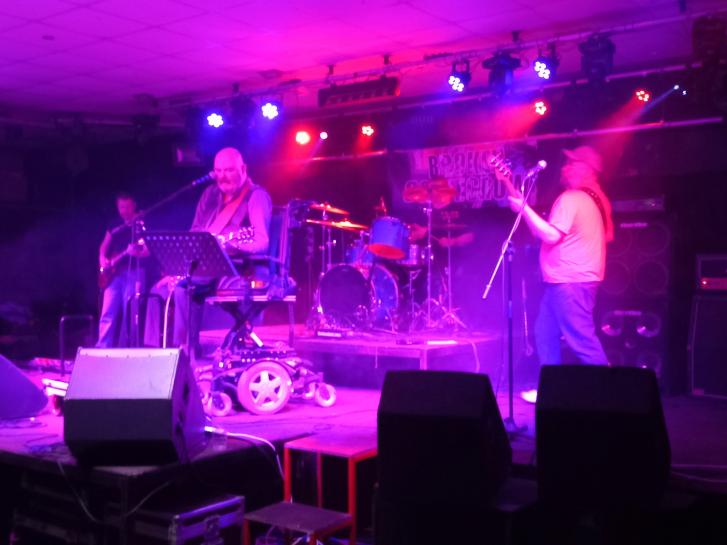 A chartered accountant has found the courage to do her first skydive, inspired by the friendship of a musician who has a muscle-wasting condition.

Lis Watson met Simon Wright, a multi-talented songwriter and sportsman who has facioscapulohumeral muscular dystrophy (FSHD), when she was going through a difficult time in her life.

Simon has been a mentor and counsellor who has helped me regain my confidence through playing bowls, working out together and going to gigs.

It is this friendship that has inspired me to face my fear of heights for the charity skydive, which I am doing on 24 September to fundraise for MDUK, as well as two local hospices.

Simon has been a sportsman all his life. He played county level hockey and pool and, after his diagnosis, took up snooker, then sailed racing yachts at international level.

At one point he was ranked sixth in the world in challenger class sailing and trained with the GB Olympic team. Recently he has bowled for his country in the Disability Bowls England team, reaching County finals in able-bodied National competitions.

Not only did he run the Hull Sailability Group, he was a trustee for the Coverham disabled sailing club, a local co-ordinator for MDUK, a volunteer counsellor for Survivors (a rape and abuse counselling charity), lead singer in a band, and he’s now a bowls coach too.

Simon’s band, Broken Scarecrow, is an originals blues rock band, which performed live at the third Decibels for Dystrophy gig in Hull on Saturday 11 September. More concert dates are tba.

It was a special moment for Simon, the lead singer, who belted out his own songs to fundraise for MDUK. In the background, armed with ramps and extension leads, was his wife Kriz, a dedicated care home manager, and their friend Lis.

The music is really great but since there are very few bands whose lead singer is in a wheelchair, it is even more special.

When Lis got in touch to tell me about her skydive, I immediately knew this was something special. I found the story of her friendship with Simon such a positive one. Decibels for Dystrophy was a fantastic night for all involved. It raised £590 and we are so grateful for the fundraising.