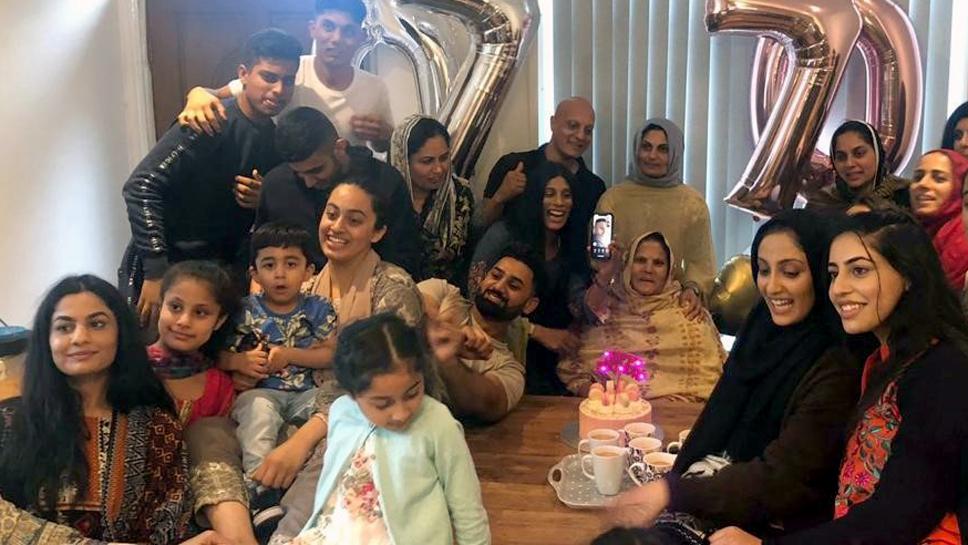 Usman Hussain, aged 27 is from Greenwich London. He is running his first London marathon in memory of his grandmother, Kaneez Begum who had seven children and 25 grandchildren.

Kaneez died last November, aged 71. Usman describes his grandma as a wonderful source of inspiration in his family and community, whose physical and emotional presence will be greatly missed.

You can read more of Usman’s reasons for running and support him here.

Last year was very hard for Usman Hussain and his whole family, because they lost their beloved grandma, caring mother and devoted wife in November to COVID-19.

Usman‘s grandmother, Kaneez Begum, was born in Jhelum, northeast Pakistan. She moved to Bradford in 1969 shortly after marrying his grandad Khadim, who had found work in the city’s textiles factories. The couple had seven children and 25 grandchildren.

Kaneez was diagnosed with limb girdle muscular dystrophy in 1971.

Usman, who works in Canary Wharf in financial services, said,

My grandma absolutely refused to let the limitations caused by this debilitating condition affect her. As her mobility became increasingly limited and she was restricted to a wheelchair, her determination to get out and about only grew stronger. As a young child I never understood the virtue of patience. But my grandmother became a role model like no other as through the years I witnessed her find solace in her devotion to her family.

She found grace and dignity in battling ‘back-to-back’ health issues. Many would have literally lost the will to live, but not my grandma! She was a true fighter, a fighter like no other!

Many friends and family would come visit her bedside. She never made them feel as if they were visiting an ill person. It was as if her duty was to reverse the attention from herself on to them and make them feel at ease. I had the privilege to live with her for 22 years before I moved to London. She was my second mother, my confidant and friend.

Usman has loved pushing his body to train ahead of his first London Marathon.

And this Sunday he is keeping his fingers crossed that he will get to the finish line, see his  family and friends cheering him on  and give his grandad, who is travelling from the north of England to be with him, a ‘big hug’.

Afterwards he is also hoping to hog the massage table for as long as possible! He said,

The muscle-wasting condition which my grandma lived with is an inherited genetic condition that causes the muscles to weaken over time. Therefore, my family has chosen to support MDUK, and their work as the leading UK charity focusing on muscular dystrophy and other related conditions. They are dedicated to beating these conditions by finding treatments and cures and to improving the lives of everyone affected by them.

Running the London Marathon is a monumental life achievement and a truly courageous thing to do. Before even reaching the start-line, runners must find the determination to dedicate months of the year to demanding training plans and to work hard to reach and exceed their fundraising target. We are so grateful to Usman for choosing to raise funds and awareness of MDUK in memory of his beloved grandma, Kaneez. The work of MDUK is needed now more than ever, and the support of people like Usman means so much to us. We wish him the best of luck with this challenge – and we’ll be supporting him every step of the way!

An online article in the Independent described Kaneez.