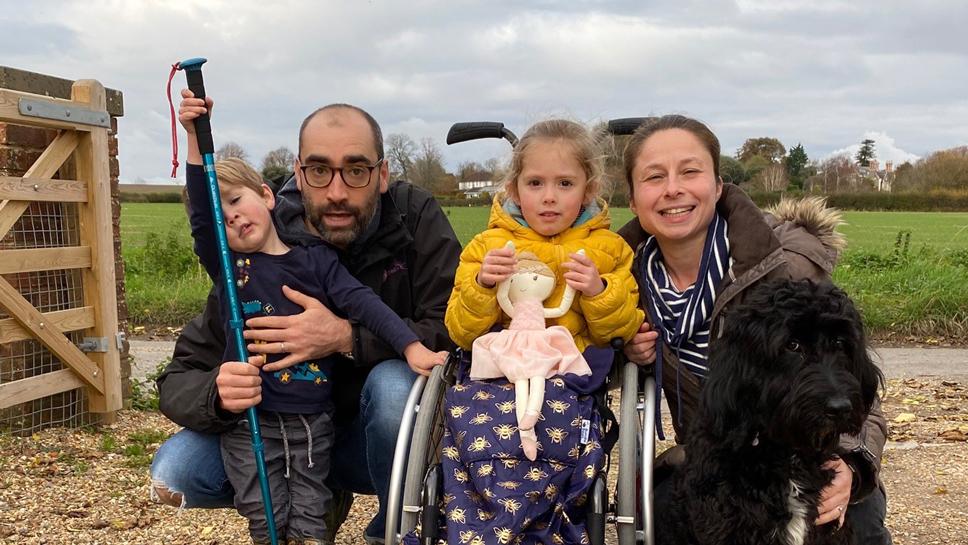 An East Sussex family is to begin fundraising following their daughter’s diagnosis with a life-limiting muscle wasting condition.

Until she was 18 months old, Josie Chubb met all the ‘usual’ milestones. She sat up, crawled and learnt to feed herself, all as expected.

But at that point, her parents, Charlotte, 39 and James, 38, noticed her walking was very slow. She didn’t seem to have the upper-body strength she needed to support herself and moved around by bottom-shuffling.

She fell over a lot and struggled to stand up from the ground. Charlotte said,

We thought it might be a balance issue so we enrolled Josie in a ballet class. At the same time we asked for a private paediatric physio to assess her.

At that assessment, the physio made an emergency referral to a paediatric consultant. From there, Josie underwent various medical and blood tests, which revealed slightly raised, but not high creatine kinase (CK) levels. Various other scans and cardiac checks followed, and then finally a muscle biopsy. At this point, the family was referred to the Evelina Hospital in London. From the muscle biopsy results, the team initially thought she had spinal muscular atrophy, but genetic testing did not match.

We were then referred to Great Ormond Street Hospital for a second opinion, where they reviewed the muscle biopsy. Unfortunately, due to COVID, there was a year’s delay before the results were provided and we finally had the diagnosis, for Ullrich congenital muscular dystrophy. The benefit of having a formal diagnosis, despite the devastation, means Josie's difficulties can no longer be brushed aside.

You have to change and adapt the way you think about everything. On the flip-side, it has taught us to be more patient, understanding and empathetic. And not so quick to judge.

Charlotte has described her daughter thus,

She is very loving and empathetic and likes to mother her younger brother Harry. She loves to be with friends and to have people around her and is very sociable. She has a great imagination and cleverly orchestrates a room to engineer play to include her. She is very determined and will have a go at absolutely anything. She just may have to do it the ‘Josie Way.’

She hates to miss out and just wants to be involved. She really loves nature and to be outside. She finds joy in swimming and just being in the water as it enables her to do the things she cannot do on land. She definitely seems to take most of the adjustments in her stride.

Charlotte is now determined to raise funds and awareness for the condition. She and her family have launched a new MDUK Family Fund called The Chubbs’ Crusade, and she’s starting her fundraising by running the London Marathon in 2022.

I am really delighted to welcome Charlotte to the MDUK community as a family fund.

You can read more about the Chubb family and support them here https://www.justgiving.com/campaign/Thechubbscrusade