The roles of animals in research 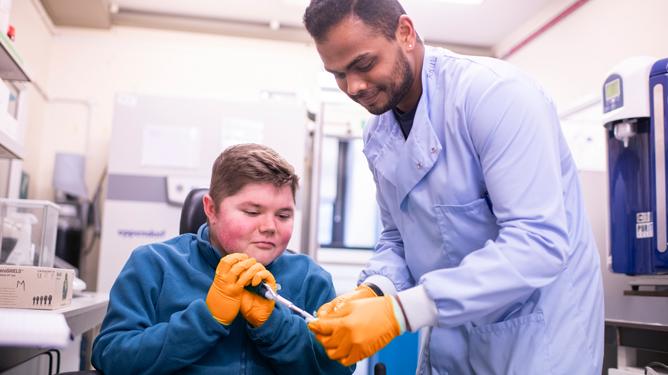 This page is designed to help you understand the role animals play in research.

“Animals play a vital role in understanding the causes of disease and in testing new treatments. Currently most research starts with clinically examining the disease in patients then comparing cells from the patient with cells from healthy individuals.

However, for muscle diseases, such cell cultures do not represent the complex three-dimensional structure of a working muscle with its interactions with blood vessels, nerves and other cell types.

If we know the characteristics of a drug then we can use computer models to predict:

Unfortunately, in many cases with a new drug, such information will not be available. In addition, the predictions which are derived from normal animals may not apply in disease. Therefore, in these cases we need to use an animal model of the human disease to assess the potential of a treatment to be clinically effective.

Most of the animals used in research are mice or rats. Mice are particularly useful as there are good techniques for altering the genes of mice. This has meant that it has been possible to generate a large number of mouse models of human diseases.

In some cases disease-causing genetic modifications occur naturally, for example the mdx mouse model of Duchenne muscular dystrophy (DMD). Mice are small, easy to house, breed well and are cheaper to work with compared to large animals. However, mice are very tough and may not show potential side-effects of the treatment.

In some cases it is possible to use a larger animal model, for example there are dog models of DMD, although these are used quite infrequently.

The animal models of disease are used to show that the treatment is effective. However, additional tests for harmful side-effects in normal animals are required before a drug is allowed to be used in a human trial. The animals most often used in this type of regulatory toxicity testing are rats, dogs or monkeys.

UK legislation controlling the use of animals in research

The use of animals in research in the UK is controlled by national legislation through the Animals (Scientific Procedures) Act, or ASPA for short. This requires that:

From 2013 a closely related set of regulations has been in force across Europe but different rules apply elsewhere in the world.

In the UK the operation of ASPA is controlled by the Home Office, which has veterinary or medically trained Inspectors who determine if licences should be granted. They can also conduct unannounced inspections of any approved establishment. Central to this regulation is a careful consideration of the harm to the animals weighed against the potential benefit to humans (or other animals).

Scientists are required to replace animal work with other methods wherever possible, to reduce the number of animals used to the minimum necessary:

The aim is always to minimise any pain and suffering.

Thus we can rightly claim to have one of the best systems in the world for controlling the use of experimental animals and ensuring their welfare.

The work carried out in my laboratory

Much of the work in my laboratory to test potential treatments for DMD uses the mdx mouse, a mild model of DMD. The mice show no obvious clinical signs of the disease but have characteristic dystrophic changes in the structure and function of their muscles. In many cases the test medication can be given in the food or water.

At the end of the treatment, invasive procedures, such as assessment of muscle function, are only undertaken under deep anaesthesia. Mice stay asleep until they are killed for further examination of their muscles. Thus, the mice experience little, if any, discomfort as a result of the experiment.

Much of what we know about the details of the different events associated with the loss of dystrophin in DMD has been derived from work with the mdx mouse. Some drugs such as the morpholino antisense molecules used to induce exon skipping (gene patches) and the restoration of dystrophin in the muscle, would not have been used based on the results in cell culture. However these drugs are currently in late stage clinical trials. It was the demonstration of their effectiveness in the mdx mouse that drove the development of this form of treatment for DMD.

There are clearly ethical and financial reasons to minimise the use of animals in research. However, they are currently invaluable in achieving a greater understanding of human diseases and the development of treatments, particularly for rare diseases.”

Recently the Stop Vivisection European Citizens’ Initiative published an open letter stating that they want to repeal the European regulation that controls the use of animals in research. The initiative calls for a “paradigm shift in the way biomedical and toxicological research are being conducted”. It also asks for a new proposal, phasing out animal testing in favour of “more accurate, reliable, human-relevant methods.”

According to European law, because the initiative gathered more than one million signatures, the case can be presented to the European Parliament. 16 Nobel Prize laureates and 149 science organisations defended the existing European regulation. They also called on the European commission to ignore the plea on the basis that it would be damaging to both research and animal welfare.

“We do not wish for animals to be involved in research forever, and the research community is committed to finding alternative models. However, we are not there yet,” they said.

For more information, read this article by Professor Dame Kay Davies. She is one of our leading scientists working on Duchenne muscular dystrophy, and is concerned that scrapping the regulation would jeopardise both science and animal welfare. The article was published in the prestigious scientific journal Nature. Read it here: www.nature.com/news/keep-the-directive-that-protects-research-animals-1.17479