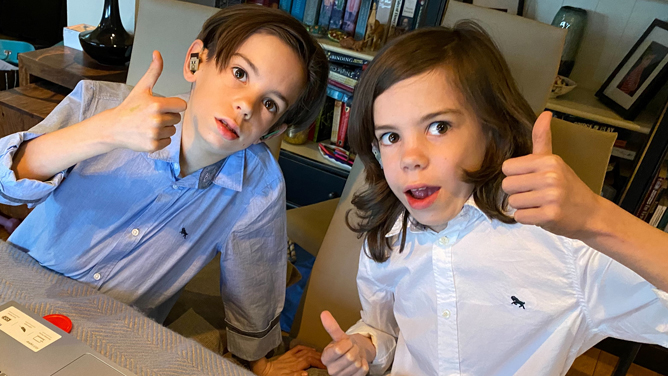 Oscar and Sebastian Spink are twins who live in Lymm in Cheshire with their older sister Scarlett, mum and dad Kerry and Grant and their two dogs Bertie and Pip.

Having experienced hip pain and poor weight gain, and also having a lack of facial movements and protruding shoulder blades it was obvious that the boys had something that needed investigating further and so began an 18-month long quest to reach a diagnosis. That diagnosis eventually came following a genetic blood test and the twins were officially diagnosed in July 2019 with Facioscapulohumeral muscular dystrophy (FSHD).

"The tests results arrived out of the blue from the hospital in the post which was obviously a huge shock. We were utterly devastated as we had read up about the possibility of muscular dystrophy on the MDUK website and so understood the serious implications of the diagnosis”

Its still very early in the journey for the Spink family as they come to terms with the diagnosis and how it will affect them as a family but they are keeping a positive outlook and have decided to help fund research into the boys condition by setting up a Family Fund and reaching out to others to get involved along the way too.

Both Oscar and Sebastian are keen golfers as the pace of the game suits them and they are huge football fans both supporting Manchester City FC. In addition they both play regularly on their games consoles listing Minecraft and Mario Karts amongst their favourite games.

"The boys are receiving regular specialist physiotherapy and are having lots of baseline tests done at Alder Hey hospital in Liverpool. We found MDUK online and the charity have been lifesavers for us with the information we have been able to obtain. We have been able to access discussion forums and social media platforms through the charity and this has been such a comfort in the darkest times. We are determined to raise funds to help pay for ongoing research and have lots of plans to put into place”

The family have to date have recruited three friends to run in the London Marathon, have held a workplace fundraising coffee morning and are currently looking at plans for future fundraising