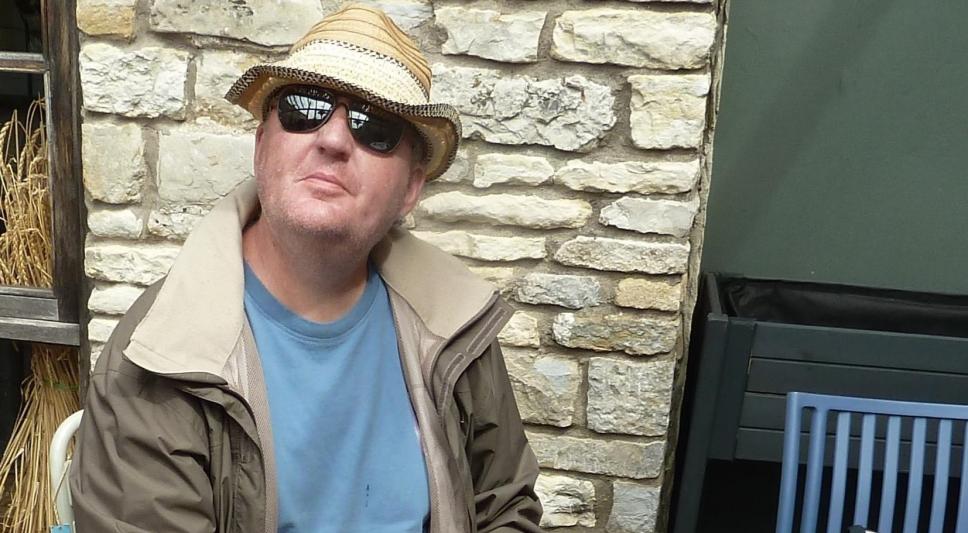 Alex’s muscle condition, mitochondrial myopathy, causes him fatigue and constant pain, which can be controlled to some degree with drugs. He is also registered blind, and has a guide dog, Homer. Alex worked as a plumber until 2009, but had to give this up because of his health.

His muscle weakness first showed itself around his eyes, and Alex had an operation when he was in his early 20s to raise them, which was successful at the time. He now has severe scarring on the surface of his left eye, which is prone to ulcerate, and both of his eyes are very dry and painful. Alex has to put drops in hourly. He becomes extremely fatigued quickly, so has to plan what he does every day.

In late December 2017, Alex received a letter from the Department for Work and Pensions telling him he would be changing from Disability Living Allowance (DLA) to Personal Independence Payment (PIP) and would need to re-apply. This caused Alex a lot of concern and worry over the Christmas period. Alex was told the form would need to be completed and returned by 12 February, which was not achievable, so he rang to request an extension and was given two weeks.

Alex and his mum went through the form and answered the questions that they could, and realised they needed help. Alex then contacted Citizens Advice, which supported him with his application. It took several hours to complete. Alex had previously tried to get support through his housing association’s benefits advisor, but found it difficult to get hold of her.

The whole process of applying for PIP is extremely stressful. I struggle with my mental health, and every time I have to do this kind of thing it has a big impact. Having to talk about personal things in detail to people you don’t know is degrading and embarrassing. My details are already on record and state that my conditions are progressive and are only going to get worse.

I almost have a panic attack whenever I receive a letter from the DWP. Life is very challenging at the best of times, and to go through these periods of extreme anxiety every few years is a huge setback for me. There is just no thought or concern for how the process affects people. It’s like they don’t care.

I received my last letter from the DWP over Christmas, and had to ask for an extension, which was accepted. But it had an impact on the time it took to hear back. I don’t understand why they didn’t wait until the New Year to contact me. The timing was terrible.

When Alex stopped work, he lost his house, could no longer drive, and moved 25 miles from where he had been living for 30 years, leaving his friends and social life behind. He describes this as a very dark time. His former guide dog, Marky, came along in 2013, and this gave Alex the confidence to go out on his own and to college.

Alex received Direct Payment from Somerset County Council to pay for college. Going to college helped his mental health, but in December 2018 his payments were reviewed and Alex was told he no longer met the new criteria and the money would stop in January. This has had a big impact, both mentally and financially. Alex had to borrow money from his mum to pay for the following two terms.

You take three steps forward and five steps backwards all of time. My conditions are difficult enough to cope with – but I do – but the mental health side of coping is so difficult and there is no support. No one asks to have a disability, and I definitely am not asking for more than I’m entitled to.