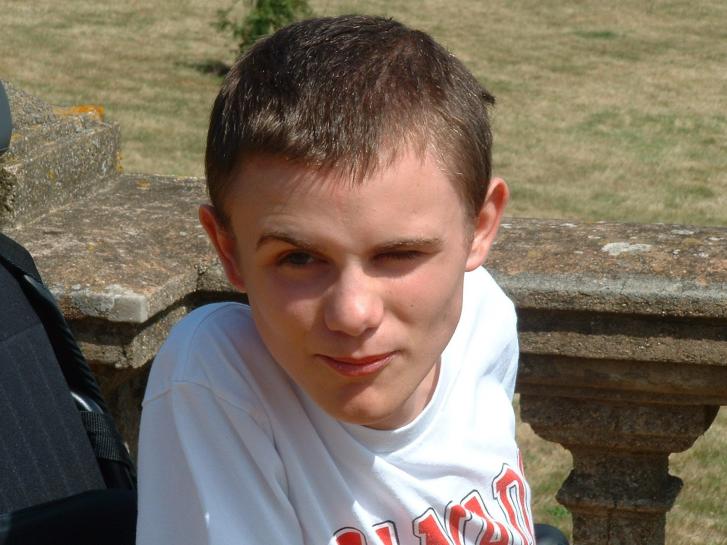 Andrew J Daniels is to cycle 1,200 miles from Hastings to his home in southeast Spain to fundraise in memory of Matt, who died in 2016. The huge challenge starts on 12 September 2022.

Andrew and his partner David Upjohn have fostered children with complex disabilities for 30 years. One of those very special children was Matt, who had Duchenne muscular dystrophy. He arrived in their Hastings home at the age of 12 in urgent need of care.

When I got home from work that day, I entered my lounge to find a young man, sitting cross-legged on the floor, wearing a helmet to avoid damaging himself from banging his head on things. On his left hand was a hard and angry pad of skin, which his anger and frustration had caused him to repeatedly bite. I sat cross-legged beside him and introduced myself, copying a sound he was making with his mouth. He looked at me as if he could not quite believe there were two people in the world who could make that sound. He smiled, and on the spot we became incredible friends.

Matt had a learning disability as well as a physical one, but beyond those two things was a personality that, after about four months with Andrew and David, bubbled and sparkled, causing everybody he met to fall in love with him. As he felt increasingly secure, the helmet was dispensed with and the hard pad on his hand started to heal.

Andrew and David cared for Matt for 14 years until his death, in 2016, and Andrew describes the time spent with him as ‘the greatest achievement of my life’.

He found Matt inspiring in many ways, including his ‘let’s do it’ attitude, which he started every day with, and a complete willingness to adapt to the constant changes to his body. He said:

He also had absolute trust in me, which is something that made me feel very honoured. When Matt came to live with us, I had just got a job as a teacher in a special educational needs (SEN) school close by, Glyne Gap SLD School in Bexhill-On-Sea. On the day I started, Matt also began, actually as a pupil in my class. For four years, until I left, we spent each day and evening together. Caring for children with challenging health conditions, as well as having a second full-time career was just too much, so David and I both committed to just doing the fostering, which was a 24-hour occupation. Of course, as Matt got older, we saw him lose the ability to do things like feed himself and shuffle around the floor, but it was not until he was 21 that the impact of the condition on his respiratory system started to be felt and he began to require non-invasive ventilation.

Matt died in 2016, at the age of 26. His death, although of course expected, was tragic and very difficult.

But he still inspires me every single day of my life. When things get tough on the cycling challenge, his example will be my constant strength and energy. Through the grief, I still cannot think of him without smiling and feeling positive.

Andrew’s bike ride will take him from his former home in Hastings to his current home in Southeast Spain. The 1,200 miles should take him about three weeks, at 60 miles each day.

I’m going to use my old heavy mountain bike because if I could afford to buy a lighter and faster mount, I’d probably just donate the money to the charity and not bother with the ride.

Andrew will start his ride on 12 September 2022. Friends have donated a campervan, and David will drive ahead to find a good overnight spot each evening. He will cycle alone as he is then only responsible for himself, and won’t have to go too fast or to slow down to match other people’s abilities.

I’ll record my mileage and keep a daily journal to show that there is no cheating, which I could not live with anyway.

David and Andrew, both now retired, moved to Spain in July of 2020 and live in San Miguel de Salinas, about an hour south of Alicante. You can support Andrew’s cycling challenge here.

The challenge that Andrew is taking on is really amazing, especially considering the bicycle he is doing it on! Matt sounds like he was a wonderful person, and I am sure their memories together will keep Andrew going through the tough times. We are really grateful to Andrew and David for embarking on this challenge to raise money for people just like Matt, living with muscular dystrophy.