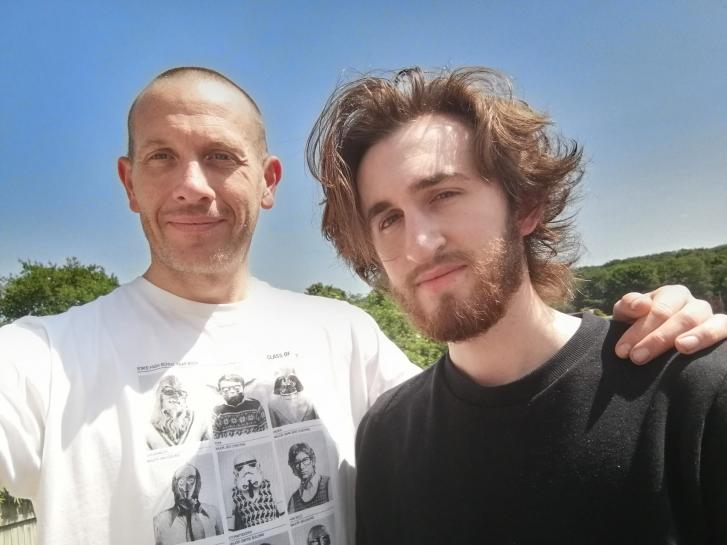 Scott Mitchell started signing up for fundraising events in 2017 after receiving the devastating news of his son Alex’s late diagnosis of Becker muscular dystrophy in 2015.

He has only been running for two and a half years but after competing in the Manchester Marathon in 2019, he just had to try and get a place to run with Team Orange in the London Marathon. He had also signed up for Manchester and Windermere marathons, increasing the difficulty as they were all within a seven-week period.

Everyone says [London Marathon] really is ‘the one to do’ and due to its huge profile, it’s a great way to raise funds and sponsorship. The support and camaraderie of total strangers appears to be more wonderful than any other event I’ve been involved in.

Scott said he is not just taking on events to raise money for the research into trying to beat his son’s condition, but to support the charity doing what they do best “by supporting the likes of us and all others that need it most.”

When his determined plans for this year, which included a triathlon, were compromised by the COVID-19 situation and he found himself working from home, he actually increased his training, leading up to the Lockdown Lakesman, his most recent achievement. The Lockdown Lakesman saw Scott ‘just’ doing the half, a 56 mile cycle followed by a half marathon run in June.

The organisation was all done by the individual competitors, so anyone could do the event anywhere. I kept my run to a loop, always within 5k of my house. I always carry my phone, and water is never far away should it be needed meaning I kept it as safe as could be. It was a solitary run, so about as COVID-safe as you can get.

We kept the cycle as flat as possible, to save our legs for the run. Since I live in a little village just outside the Lake District most of any training or events are in beautiful countryside, on country lanes with no traffic, or swimming in the lakes themselves, and I feel this is always a huge boost. Just looking around gives you a lift.

Scott commented that fundraising is much more difficult in the current climate.

A lot of people are struggling, people have lost family members. Jobs have been lost and the general morale has been a bit low, so I’ve avoided asking people for any donations, apart from a day or two before the Lakesman. It just feels wrong to be asking the public when I know they are having their own issues. But, some wonderful people still made donations and helped the pot along a bit.

Scott’s son Alex is now 19, and has just finished his first year studying Physics, Astronomy and Cosmology at Lancaster University.

He’s an amazing young man and my inspiration. He just gets on with it, despite his condition. Now a student proper, a beard has appeared (naturally!) and his hair has grown longer! As well as being a bright spark, he is an insanely talented pianist who was classically trained by a friend’s mother. He’s performed at a few venues for people and organised events, and in 2018 played at Hexham Abbey in a concert for MDUK too. It was jaw dropping, as were all of the performers. He’s into gaming online, whether by himself or with his friends

Lockdown has interrupted his activities and he has coped well by getting on line with the University and finishing this year’s studies regardless.

The downside is that he is not able to do all the other student things, like hang out with his mates, go for a drink, meal, and just generally have a laugh with them.

Scott said MDUK were extremely helpful and supportive not only at the time of diagnosis, but thereafter, when they were trying to work out what needs they had, what support they could receive and providing reassurance and guidance as to various aspects of day-to-day life that would need to be addressed.

His first challenge was the ‘Lakes Tour.’ It was a cycle ride taking in the extreme compass points of my home county, Cumbria, and the highest point too.

Myself and my dear friend Tim Noble cycled 320 miles in four days, and I added over 100 miles extra beforehand by cycling to the official start line, doing around 450 miles in total. At the same time, another friend, David Reed, ran seven half-marathons in eight days from the south of Cumbria to the north, where we all met at the finish line in a co-ordinated way, to celebrate among family and friends who’d been supporting us all the way round, some running along with David. Adding to this we had Sam and Will Taylor (Will suffers from Duchenne) following us round the county providing support with food, drinks, carrying spares and generally being amazing.

In 2019, Sam Taylor (mentioned above) organised a Quadrathlon locally, which Scott took part in, along with around 45 others. They swam a mile in Windermere, kayaked the length of Windermere (13 miles), cycled 25 miles from Ambleside to Wasdale (over Hardknott and Wrynose Pass), then ran / walked from Wasdale to Langdale over Scafell. The longest lake, the steepest road, the highest peak.

This was added to when Scott went back with Sam and another regular MDUK fundraiser, Pete Gallagher, to do it all again a few weeks later, and doing it as it was originally intended, by swimming the mile in the deepest lake (Wastwater), as the weather and sheer volume of numbers put paid his the initial plans!

Scott will never stop doing what he can to help his family and friends with muscular dystrophy. Others have helped him develop a ‘can do’ attitude, and he constantly seeks events to prevent him from resting on his laurels. 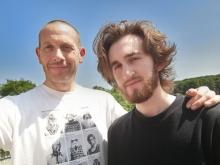