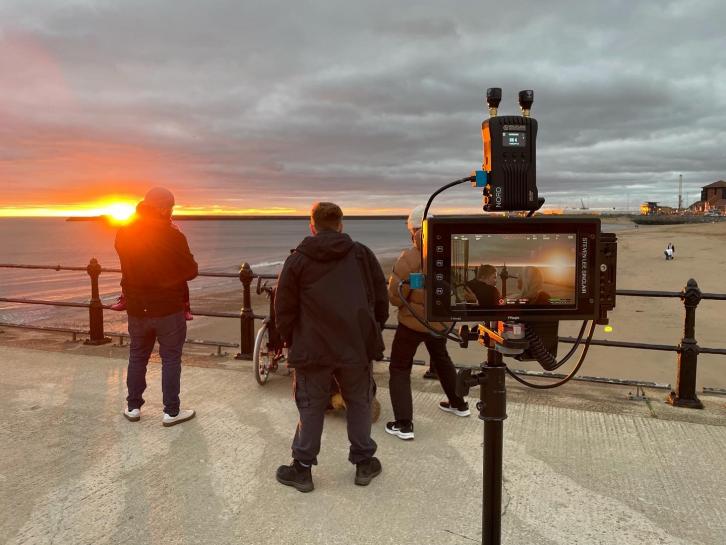 Musician Ben Potts (38) has known nine-year-old Will Calvert’s mum, Caroline, since their schooldays. They live in a close-knit community which has supported the family ever since Will was diagnosed with Duchenne muscular dystrophy in 2015. Now Ben has launched a video for the Calvert family to raise awareness and as much money as possible for their family fund, I’m in For Will and for Muscular Dystrophy UK.

This special video was first aired on 3 December. You can watch it here.

Over the years, Ben, a home insulation company director, has raised over £30,000 for various charities. For the video, he and his band, ‘Ben and Andy,’ filmed Caroline, Will, Rob, and Rosie Calvert at their home and along the Roker pier, and cut it together with footage of himself belting out The Killer’s song, ‘Be Still.’

I have been singing in bands doing solo projects since I was 13. We played at pubs, clubs and festivals and each year we tried to help a charity with a video. This is the last one we will do and it’s fitting that I do it for the Calverts to help fund vital research into finding a cure. They are great family. I’m always happy to help them if I can.

Ben looked for a hard-hitting song, which he felt would draw you in – instantly. He heard ‘Be Still,’ for the first time, while he was driving to work.

Our main aim is for the family fund to raise awareness and funds to support research to help William and all boys with Duchenne muscular dystrophy. Our community has been so amazing since William’s diagnosis, and this video is just another example of how they work together. I would like to thank the whole team who worked to make it possible. Far too few people have heard of Duchenne muscular dystrophy and I really hope it helps to raise awareness of the condition.

After Will’s diagnosis in 2015, the family set up their family fund, I’m In For Will. So far the family and their community have raised £62,546.

They’ve donated over £48,000 of these funds towards MDUK’s Duchenne Research Breakthrough Fund.

The video is just another way that I’m in for Will are showing incredible support for MDUK. For me, it is such an honest and touching account.

I’m in for Will Family Fund - JustGiving