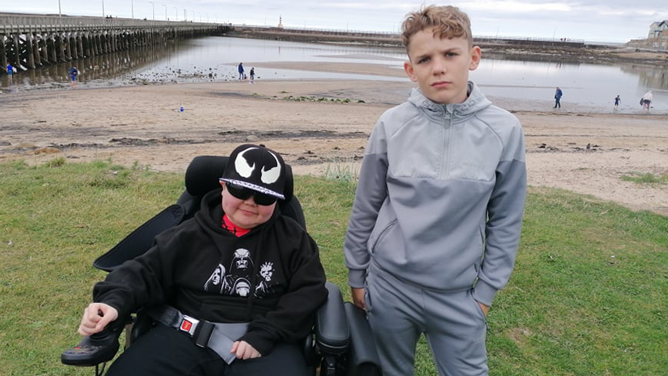 Lilian and George Pegg have set up George’s Journey, a family fund for their son George, who has Duchenne muscular dystrophy.

From a very young age, George struggled with crawling and then only began walking from the age of two, while continuing to have difficulty with rising from the floor and climbing stairs. Lilian and George took him for a physical assessment, after which he went under a muscle biopsy. At just three years old George was diagnosed with Duchenne muscular dystrophy.

We were devastated but when we were given the diagnosis Professor Bushby assured us that there was hope for George’s generation.

This hope and optimism has led to the founding of George’s Journey.

The Pegg family – including George himself – have been incredibly active in their efforts to raise funds for Muscular Dystrophy UK. They’ve helped organise everything from charity football events, to fun runs, and even karaoke nights. It doesn’t stop there though, as the family have plenty in store for this year, including George moving a mile for muscles.

Since setting up George's Journey the family have raised a staggering £200,000 for pioneering research into Duchenne muscular dystrophy