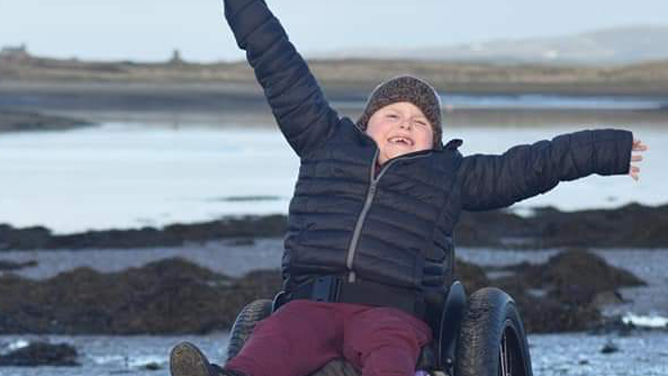 Joseph Hutchinson was diagnosed with Duchenne muscular dystrophy in 2016 at the age of 4. Originally from Yorkshire, Joseph now lives on the Isle of Anglesey with mum Katherine, dad Gareth and older sister Elizabeth.

The initial indicators of things being not quite right were Joseph’s inability to get up from the floor easily, tip-toe walking and an inability to jump or run as well as had been expected.

Further to the concerns raised by Joseph’s parents, their family GP referred Joseph to see Dr Stefan Spinty, the lead Consultant at Alder Hey hospital in Liverpool for blood tests and a muscle biopsy which confirmed the diagnosis.

As parents we were completely devastated by this news. Our world had completely changed and for a long time we felt numb. The hopes we had for the future had gone and we were left feeling scared and helpless.

Joseph is a huge fan of Disney and loves swimming, music, dancing and computer games such as Minecraft and Roblox. He was selected for a steroid treatment in 2017 and is also receiving a six monthly biophosphonate treatment to help with his bone strength. He also receives medication for epilepsy and was diagnosed with Autism in 2019.

The Hutchinson family were introduced to Muscular Dystrophy UK by the Regional Care Advisor at the hospital and have since been supported with information about the condition and with assistance on housing adaptations for Joseph’s needs.

They decided to get involved in raising funds to help pay for research into treatments for Duchenne muscular dystrophy and Gareth and Katherine have both already done a one-mile zipwire challenge at Zipworld in North Wales and Elizabeth and Katherine have done an indoor skydive at Ifly in Manchester.

"Raising awareness of this condition is so important but raising funds to help progress research is also vital. We hope that we can attract friends and family to join us on Joseph’s Journey. If everyone gets involved we can all make a difference together”

Their next challenge sees them Diving with Sharks at the Blue Planet Aquarium in Ellesmere Port, Cheshire and since setting up their own family fund they have encouraged other family members, friends and their local community to join them in supporting fundraising for treatments into Duchenne muscular dystrophy.

Connect with this family fund